The train control
system of the future

By 2031, all nine lines of the Frankfurt am Main light rail system are to be converted to a digital train control system. The “B line” with the U4 and U5 lines, including the extension into the city’s “Europaviertel”, will be the first to be completed in 2025 according to the current planning status.

The CBTC system makes it possible to travel in “wandering spatial distancing”. This means that trains no longer run in block sections, but at braking distance from each other. This allows more trains to be used on a line at the same time, which increases the line capacity.

However, the modern and efficient train control technology not only ensures more trains on the line, but also greater timing accuracy and reliability. It enables a more energy-efficient operation with energy savings of up to 15 per cent, as well as greater passenger comfort thanks to smoother acceleration and braking. It also counteracts wear and tear on vehicles and rails.

The “Digital Train Control System Frankfurt” is closely linked to the “Frankfurt MIND (+)” project, as both projects aim at holistic traffic optimisation (both in the tunnel and above ground).

The “CBTC” train control system will increase the capacity and attractiveness of the underground system and thus increase the share of rail-based public transport in urban traffic. This will ultimately lead to fewer pollutants being emitted and cleaner air in the city.

The project – including a service contract that is not eligible for funding – has a volume of around €250 million.

VGF reached two important milestones in the project in December 2021: First, the Hessian Minister of Economics and Transport handed over a funding notice in the amount of 95.3 million euros, with which the federal government and the state of Hesse are providing financial support for the project. Then VGF announced who the key partner in the project will be: Siemens Mobility.

For cleaner
air in the city 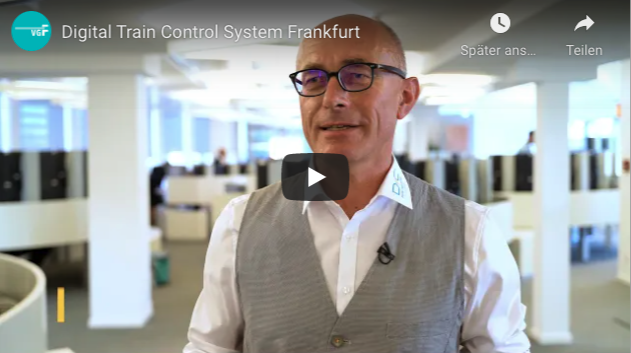 Back to
Projects in implementation