In February 2021, VGF unveiled the first “green stop” at the “Börneplatz/Stoltzestraße” stop. It will not be the only one: The “Hugo-Junkers-Straße Schleife” tram stop will receive a new “Xenon” type bus shelter with a sedum-covered roof as early as this summer (July/August). Other tram stops will also be greened, such as “Louisa Bahnhof” in June 2021 and the stop “Neu-Isenburg Stadtgrenze” in July 2021. Above-ground underground stations are also on the VGF’s plan, such as the “Kalbach” station, which is to be greened in the course of the second half of 2021. Except for the latter station, the greening will take place as part of the barrier-free conversion measures.

In the aforementioned projects, either new halls or – as in the case of “Louisa Bahnhof” – existing halls will be greened. Unfortunately, VGF cannot simply green all the bus shelters of its 139 tram stops or 57 above-ground underground stations, as not all roofs can support the heavy plant cover, which (depending on the manufacturer) weighs 60 to 90 kilograms per square metre.

It all started with the “Börneplatz / Stoltzestraße” stop. In this pilot project, the roofs of two bus shelters were planted with sedum as part of an “extensive roof greening”. This plant genus includes low-maintenance and insect-friendly plants that not only bloom beautifully, but also filter traffic-related fine dust from the air. In this way, they improve air quality and cool the air in hot weather. A water retention reservoir was integrated into the substructure of the roofs, which ensures that the plants do not have to be watered at great expense. 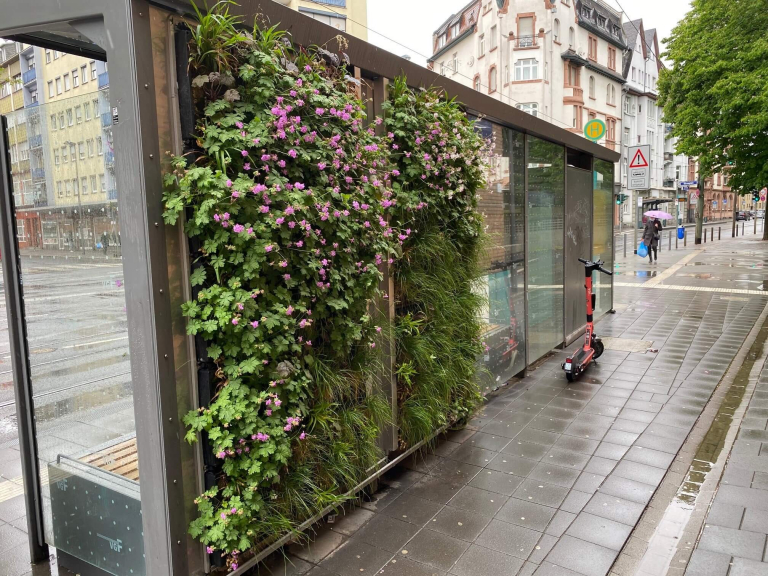 The back wall of the bus shelter in the out-of-town direction was planted with moss and plants on the inside and outside. Twelve different plants were used, such as coneflowers, daylilies, asters, purple bells and sweet grasses, which flower beautifully and are very popular with bees. The wall is irrigated via a water tank in the bench. While the green roof will remain permanently, the vertical greening – a novelty for bus shelters – will initially be tested for one year. Therefore, the other bus stops will not receive this type of greening for the time being. 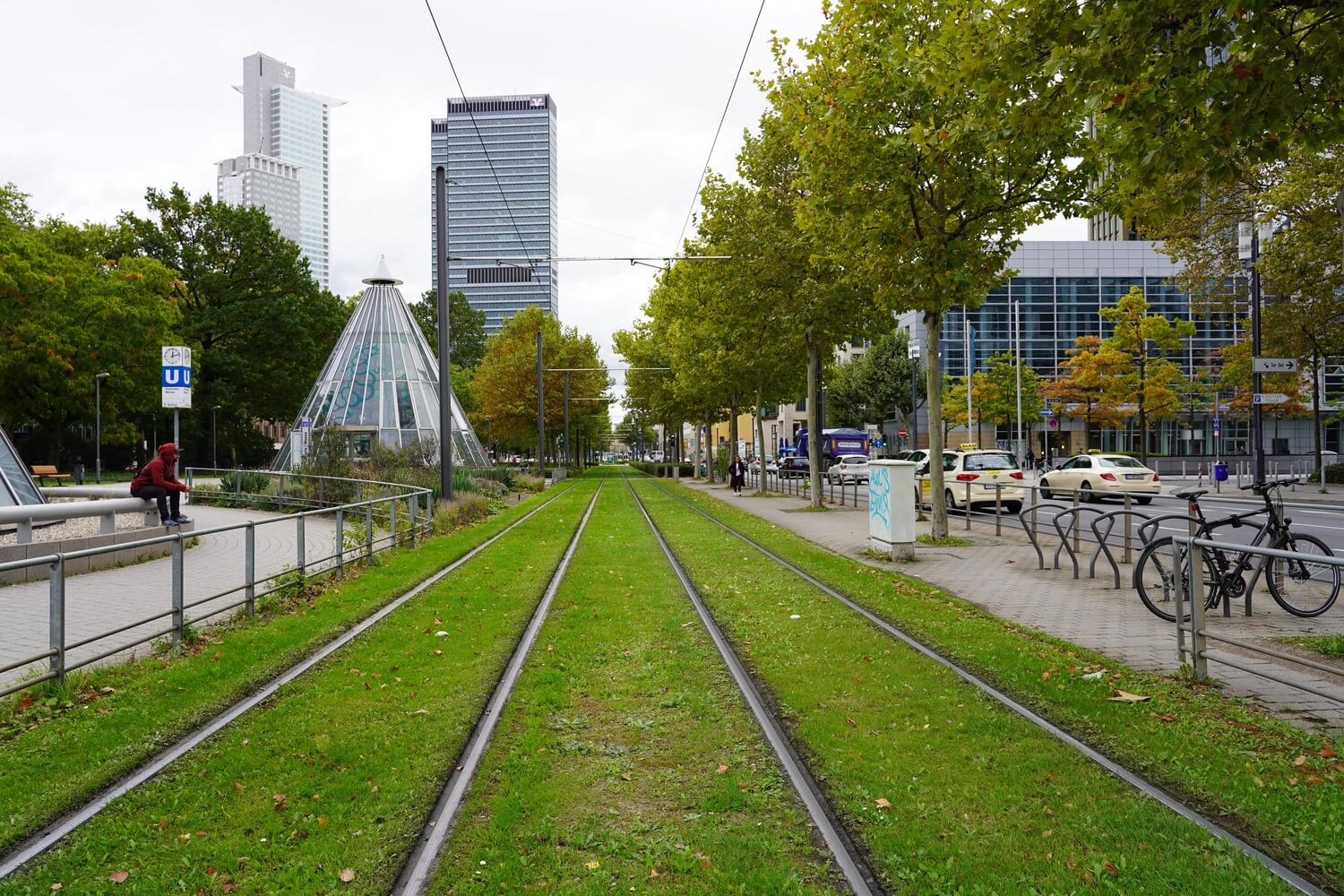 The VGF network is also to become greener between the stops. At present, around 12.4 of the near 69 kilometres of tramway operating track in Frankfurt are constructed as lawn tracks:

That represents roughly 12.2 per cent of the total route. The section over Riedberg, which was opened in December 2010, is an “exotic” example, as the U8 and U9 underground lines run here. Together with the sidings at Betriebshof Ost, this section is four kilometres long.

This means that around 9.3 % of Frankfurt’s total rail/route network already consists of lawn track, with another 64.85 kilometres of underground track added to the 68.67 kilometres of tram track mentioned above – which no doubt remains expandable. 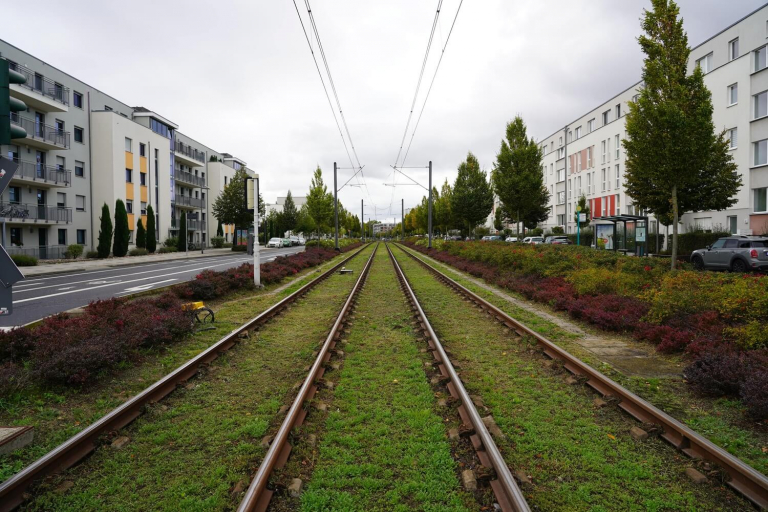 However, VGF has already thought about how this extension could be continued. Around 14 kilometres of tram line and about ten kilometres of underground line, each of which is double-tracked, could be considered for greening. These figures refer to the implementation in the track superstructure, which is possible, in principle. The following sections of track can be greened, which are also mentioned in the Magistrate’s Report B 329 of 9 September 2019.

On the metro network: 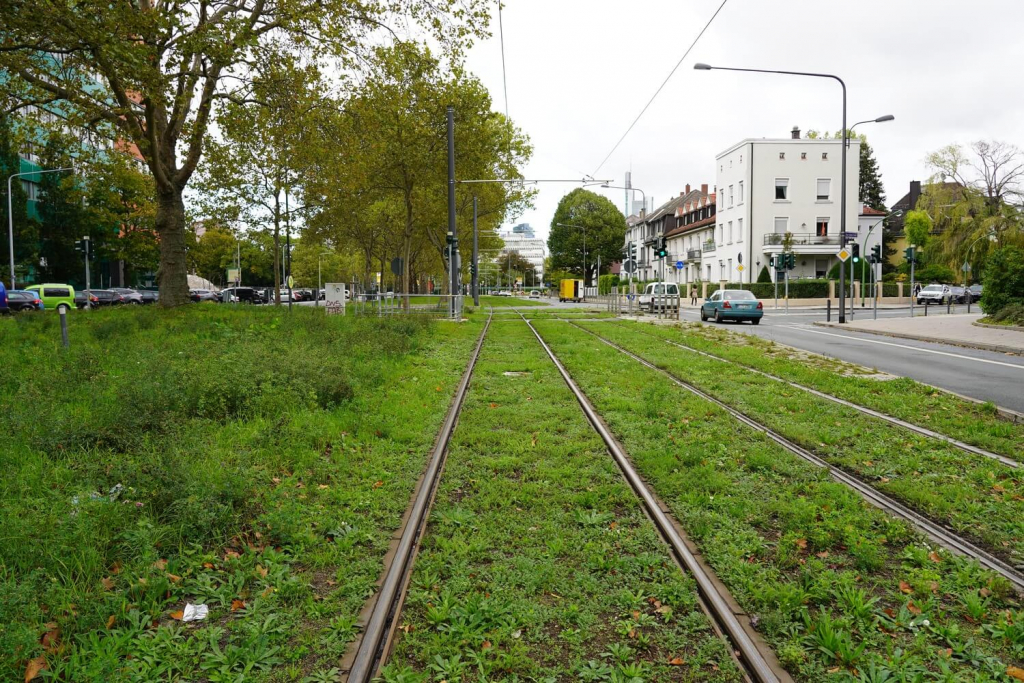 In the tram network:

When renewing track systems, VGF takes into account the structural and safety-related condition of the track. When older tracks are to be renewed, a check is always made as to whether a lawn track can be laid. For economic reasons, however, it is not possible to renew a functional, fully intact track system to make it a “green belt”.

Back to
Projects in operation